Based on our analysis of WWE’s second-quarter reporting, the two-day Wrestlemania on April 2 and 3 generated between $17 million and $19 million in ticket revenue for the company. That was driven by paid attendees somewhere between 109,000 and 120,000, or about 57,000 paying fans driving between $6.5 million and $8.5 million each night.

The live gate for the two events combined likely edged out ticket sales for the one-day Wrestlemania event in 2016, also in Arlington — the all-time leader for inflation-adjusted ticket sales to a single event in pro wrestling history — which generated $17.3 million in ticket sales, according to WWE’s press release at the time. The company’s reporting indicates that paid attendees ranged between 74,000 and 86,000, as opposed to the 101,763 announced on the telecast. The Arlington Police Department told me in an email a year after the record-setting event that the turnstile count, which would presumably include comped attendees, was 80,709.

If venue merchandise sales for this year were on par with last year’s $32.09 per capita, that would result in around $3.5 million in addition to ticket sales.

We estimate between $17 million and $19 million for ticket sales related to this year’s Wrestlemania events based on an analysis of WWE’s second-quarter reporting for its live events division. The company reported $34.9 million in North American ticket sales, much higher, as expected, than $19.9 million and $15.8 million in the prior two quarters, Q1 2022 and Q4 2021, respectively. Those periods had average ticket prices in North America of about $58 and $67. To determine our estimate for Wrestlemania’s ticket sales, we assumed non-Wrestlemania events in Q2 had an average ticket price somewhere between $60 and $70. We justify elevating our non-Wrestlemania average ticket price slightly above the range between that of Q4 and Q1 given the lack of premium live events in Q4 (there was only one, as opposed to two in Q1 and three in other quarters), and based on the lack of discount offers on tickets we noticed in Q2 compared to Q4. Each of the last three quarters (Q2, Q1, and Q4) had a similar number of house shows and Raw and Smackdown events.

A range for the paid attendance for Wrestlemania has been implied in the company’s Key Performance Indicators since 2008, and was possible to deduce from the latest update of that document. WWE reports average paid attendance in North America for the relevant quarter with and without Wrestlemania factored in. Deducing the range is just a matter of algebra. Because WWE reports average attendance rounded to the nearest hundred, we’re limited to a range within which the actual number must have fallen. This year that range has a five-percent margin. The math behind this year’s paid attendance calculation is shown below. 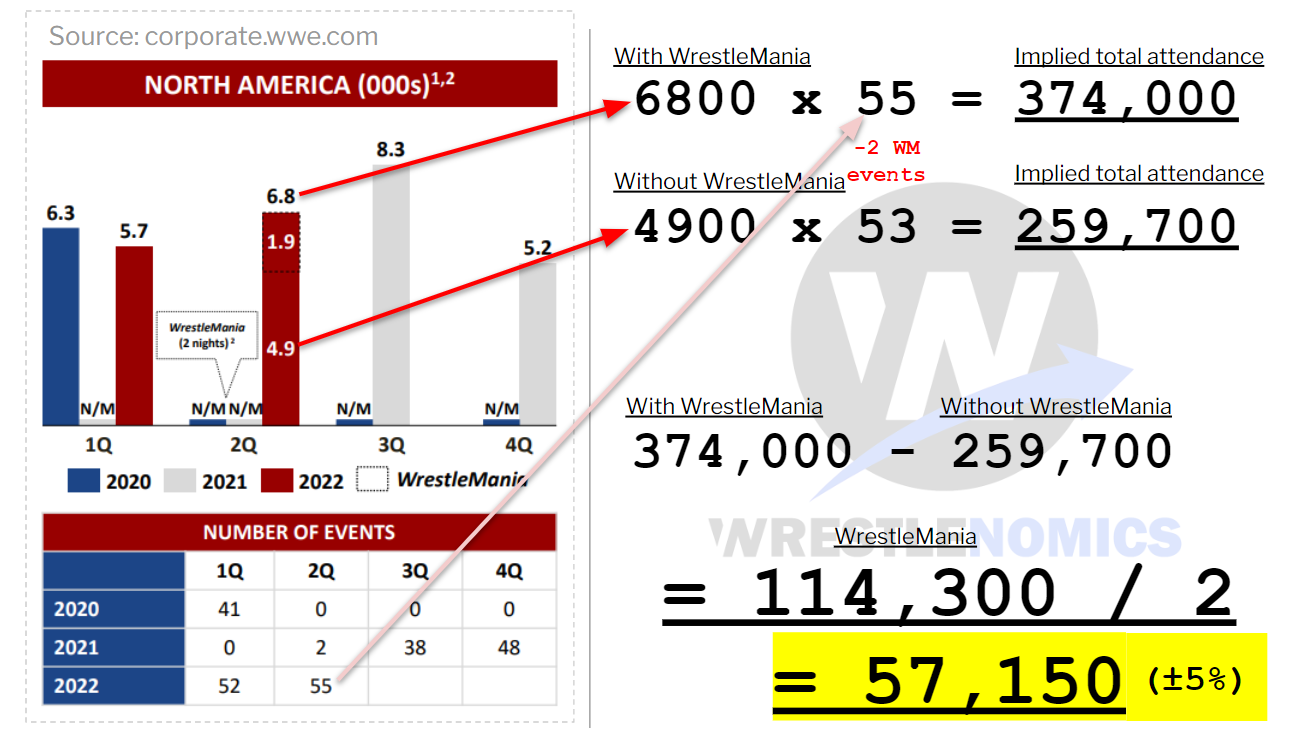 Listen now on Apple Podcasts, Spotify or wherever you listen to podcasts.

Wrestlenomics Radio is live every Sunday at 11:00am ET on YouTube